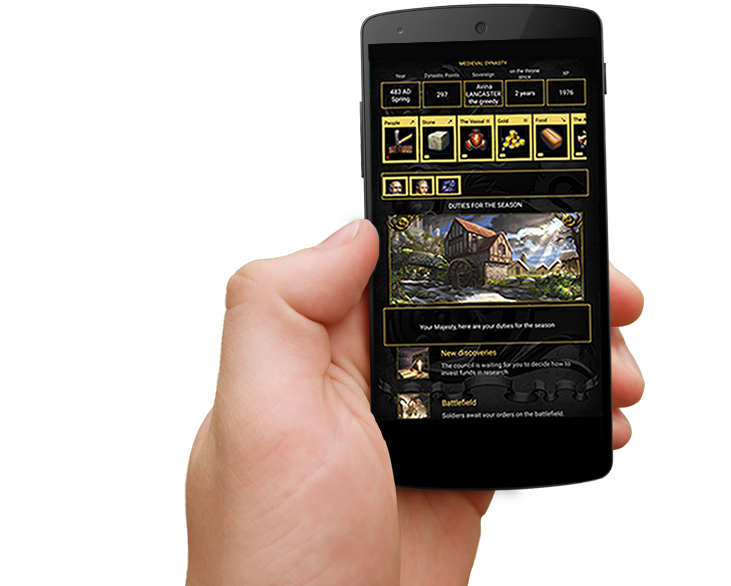 Age of Dynasties is a strategy and role-playing game in which you will have to reign over your kingdom with the help of your dynasty in a certain historical period. The series has reached over 1 million downloads.

Take the throne and become Pharaoh during ancient Egypt.

Take on the title of Shogun. Defeat enemy clans in battle and lead your samurai to victory!

Sit on the throne, rise your dynasty and conquest the world in the middle ages!

Become an Emperor and lead your legions to victory! Fight for Rome! 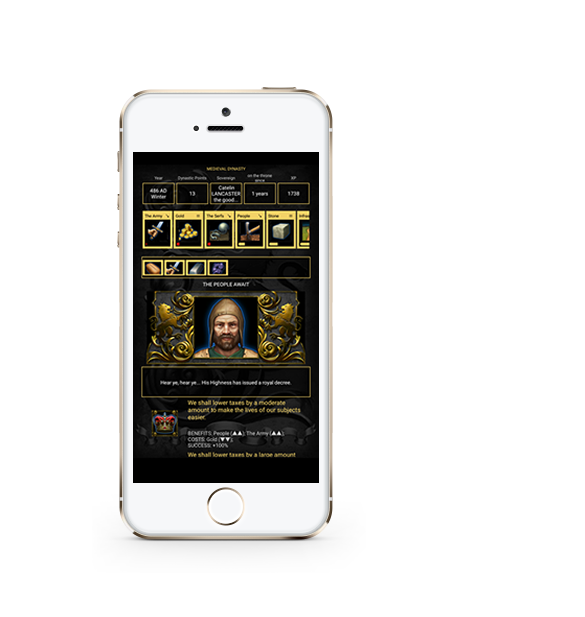 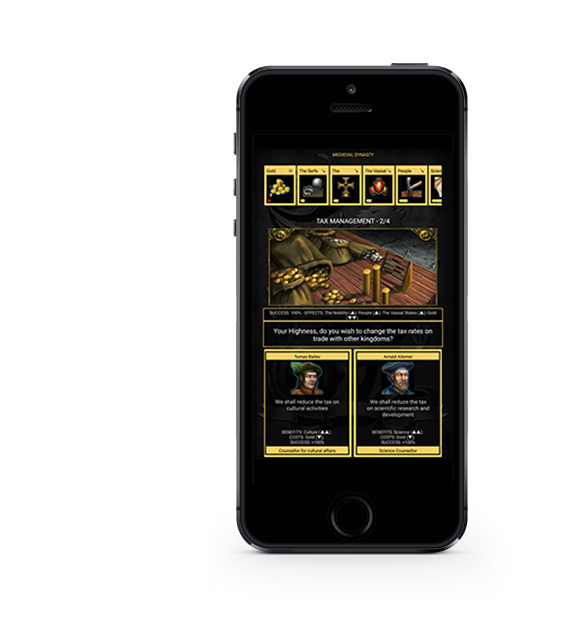 Take command, your Majesty, and measure yourself against the burdens and honours that will lead you on to greatness

Satisfy the demands of your subjects to keep the peace in the kingdom and put yourself to the test through a series of historical events, dynamically connected to each other.

Make choices, accumulate resources, and issue real decrees during each turn of the game. But remember that this will all have an impact on the longevity and the future of the king currently sitting on the throne.

Are you ready to wear the crown and rewrite the history of the Middle Ages in this Game of Kings?

Manage thorny political issues and the intricate interpersonal relationships between the members of the council and the royal family.

Build a magnificent castle, make alliances, enlist the help of advisors and become the undisputed master of your dynasty! 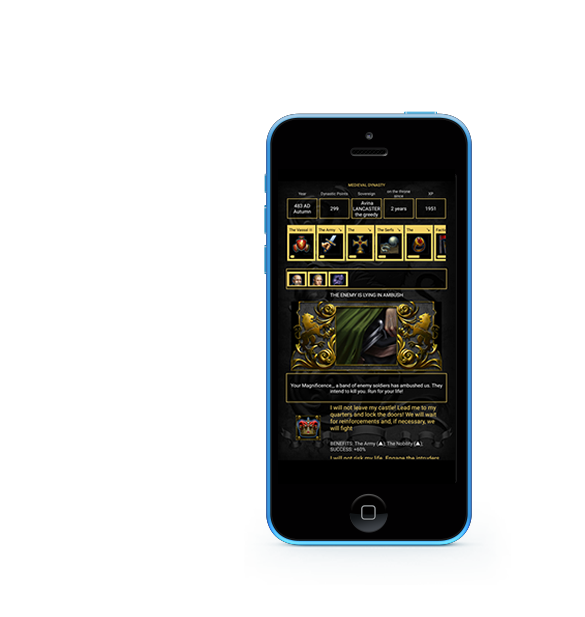 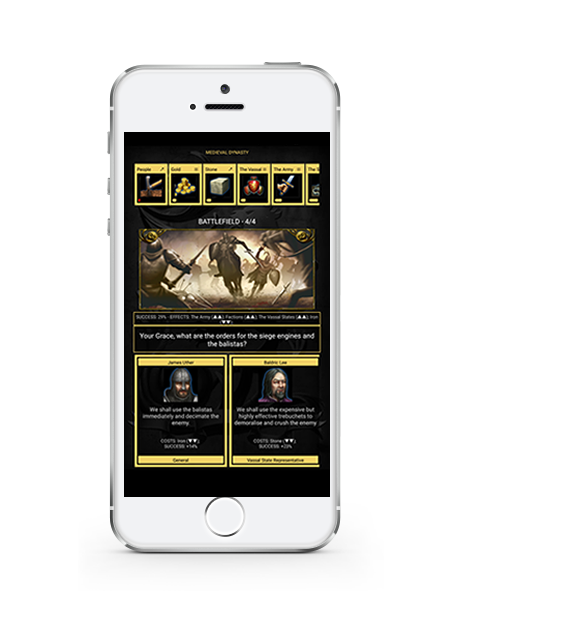 Discover new content and face new challenges in every game: with over 4,000 rounds you can enjoy many hours of fun back in the Middle Ages.

Will you succeed in obtaining the loyalty of the vassal states and putting down the rebellions that want to depose the rulers of your dynasty?

Will you be able to prevent war and famine from decimating your subjects? 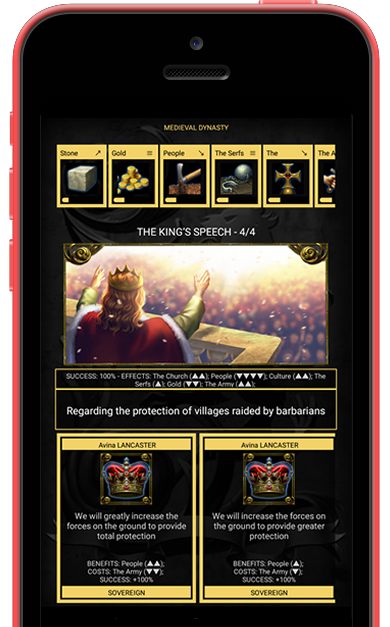 Whatever you decide will have implications and consequences. In this choices game you have to plan your moves wisely!

Now it is your turn to sit on the throne and lead the kingdom. Can you keep your dynasty alive? 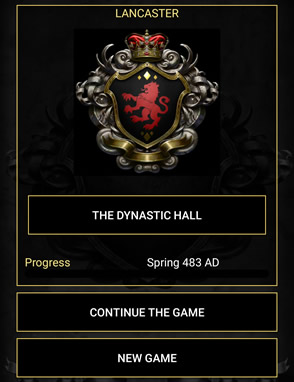 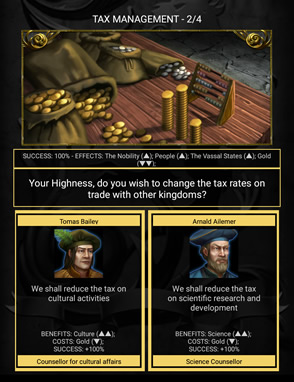 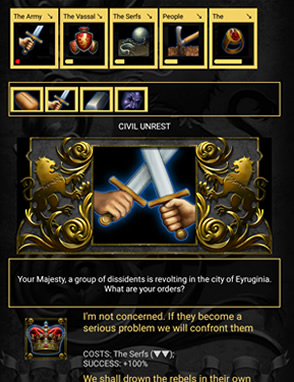 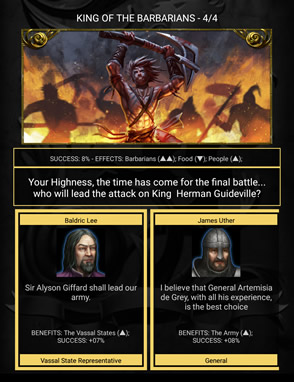 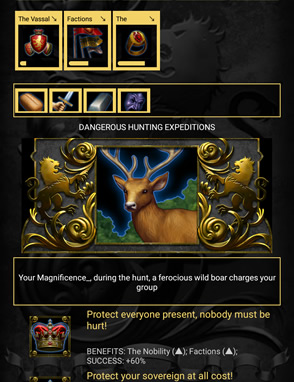 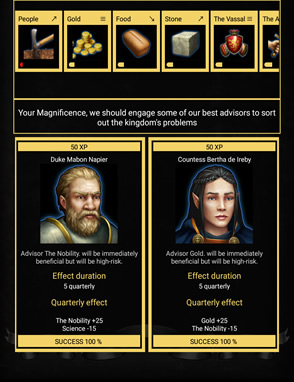 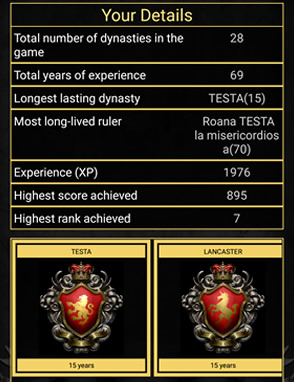 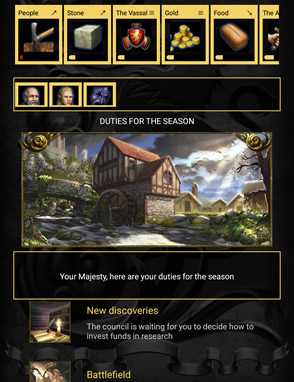 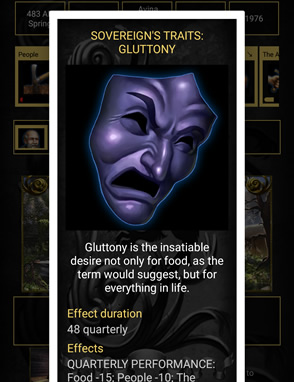 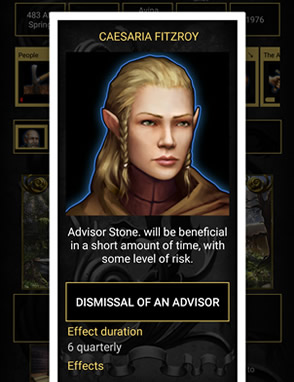 Age of Dynasties series has officially reached one million total downloads! RoboBot Studio thanks everyone who is playing our game.

The new chapter of Age of Dynasties, set at the time of the feudal Japan, is now available in all app stores. Take on the title of Shogun. Defeat enemy clans in battle and lead your samurai to victory!

The new chapter of Age of Dynasties, set at the time of the Ancient Egypt, is now available in all app stores. Will you be able to fulfill the demands of your subjects, maintain the favour of the gods and subdue enemies with your war chariots? Become Pharaoh and find out today in this exciting historical RPG!

A Wiki about Age of Dynasties supported by RoboBot Studio and maintained by the contributions of the fans is now available at this link:
Wiki Fandom

The official Discord server about Age of Dynasties is now available. You can join the server using this link:
Discord Server

This upgrade expands and improves the management of your house by introducing new concepts: personal characteristics of family members, events related to the life of family members, the royal palace, heirlooms, noble titles, guests of honour, missions and rewards.
- Personal characteristics of family members: each family member now has new characteristics available that will influence they act in their social, political and romantic life (abilities, character, passions, attitude towards the sovereign, loyalty towards the dynasty)
- Political, social and romantic events in the life of family members: new events in the life of the family member have been added.
- Royal Palace: The ability to access and upgrade your Royal Palace has been added
- Heirlooms and Noble Titles: These upgrades can be purchased for your most promising heirs in order to improve their abilities
- Guests of honour: new illustrious characters are now available who can be invited to the royal palace to help you face the challenges of the game
- Missions and rewards: missions can be completed to redeem experience points to use to upgrade the palace and purchase family heirlooms, noble titles, and guests of honour.
- Abdication: it is now possible for the king to abdicate if necessary
- Personalisation: new images with which you can customise the appearance of your heirs have been added
- Family tree: the family tree has been extended to show new degrees of kinship (uncle, cousin, nephew, etc) and to modify the criteria for the line of succession.
- Achievements: game achievements have been added to increase your final score and uncover the challenges available

The new chapter of Age of Dynasties, set at the time of the Roman Empire, is now available in all app stores. Hail Caesar! Your legions await you to conquer the world and lead Rome and your dynasty to eternal glory.

This expansion introduces the concept of game acts, along with new management and strategic features. Each act of the game has a conquest objective. To achieve the objective you will have to manage the following items in the most effective way:
- Cities and buildings: You can now manage your cities by deciding what to produce and which buildings you need to construct to improve the economy and administration of your kingdom.
- Armies and Battles: You now have full control over the management of your armies. You can decide the size and composition of the armies and the strategies to be adopted in the new battle system.
- Factions and diplomacy: You now have the ability to manage diplomatic relations with each faction and forge agreements, alliances, or to arrange royal weddings.
- Functionaries and roles: You can now employ officers to help manage the various aspects of your kingdom or assign roles to your relatives. Among the roles available are: generals, spies, ambassadors, or administrators.
- Technology and discoveries: as time progresses you can now invest in research and discover new technologies with which to improve the management of your kingdom.

The fourth expansion for Age of Dynasties is now available for Android, iOS and Windows 10.
What's new:
- Game balance: We redesigned some game mechanics based on players' suggestions. In particular, we have reduced game difficulty and frequency with which Kings and Queens can die (if they have positive traits)
- Events optimization: historical events frequency has been reduced to make the game less repetitive and new events has been added to diversify the game storyline
- Talents management optimization
- Bug fixing

The third expansion of Age of Dynasties is now available for iOS, Android and Windows 10! What's new:
- Heraldry: added new heraldry and colours
- Character customisation: added new images for rulers, heirs and subjects in the game
- New Events: added new events to diversify the game's plot and add new challenges
- minor bug fix
For marketing and copyright reasons we have changed the name of the game to Age of Dynasties.

Age of Dynasties is now available in Arabic and Korean

Age of Dynasties: Game of Kings is brand new to mobile

The release of Age of Dynasties: Game of Kings took place – is it really Crusader Kings 2 on mobile?

Brand new to mobile: Age of Dynasties on iOS and Android

Free Apps for me

Age of Dynasties is among suggested games iOS to play by Gameskeys: Underrated Role Playing Games To Play on IOS

Sit on the throne, rise your dynasty and conquest the world in the middle ages!

Become an Emperor and lead your legions to victory! Fight for Rome!

Take the throne and become Pharaoh during ancient Egypt.

Take on the title of Shogun. Defeat enemy clans in battle and lead your samurai to victory!